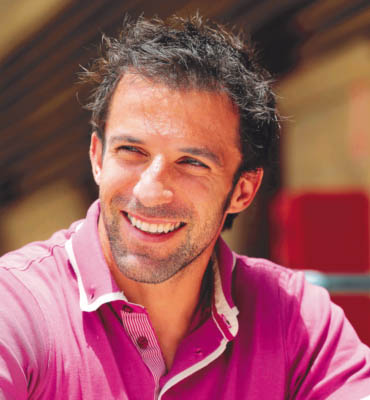 Alessandro Del Piero is an Italian former professional footballer who mainly played as a deep-lying forward, although he was capable of playing in several offensive positions. Since 2015, he has worked as a pundit for Sky Sport Italia.

In 1993, Del Piero transferred to Juventus and played for the Torinese club for 19 seasons until being released in the summer of 2012. Although manager Giovanni Trapattoni insisted that he trained with the senior team, he initially played with the Primavera squad, which was coached by Antonello Cuccureddu, helping the Juventus Youth team to win both the 1994 Torneo di Viareggio, and the 1994 U-20 Scudetto. Del Piero made his Serie A debut against Foggia on 12 September 1993 under Trapattoni, as a substitute, and he scored his first goal in his next game against Reggiana on 19 September, after coming off the bench once again. On his full debut for Juventus, he netted a hat-trick against Parma. After his promising performances, Del Piero began to be deployed with more continuity, and he managed 14 appearances for Juventus that season between youth matches, league matches, the Coppa Italia, and the UEFA Cup, scoring 5 goals, which all came in Serie A, as Juventus finished the season in second place in the league.

A few weeks after the start of the new season, Juventus has a new partner: Beebad, an energy drink that is uniquely positioned on the market. In fact, it is a premium product, based on honey and other natural elements (caffeine, royal jelly, ginseng, propolis, maca) and enriched with vitamins B6-B12, ideal for sports and to maintain mental concentration.

Discover what's inside a can

Find out where you can buy BEEBAD

Learn more about who we are

We use cookies to make sure you can have the best experience on our site. This site uses technical and third-party cookies for features such as sharing on social networks and / or viewing media. For more information consult the Read More.
ACCEPT

Any cookies that may not be particularly necessary for the website to function and is used specifically to collect user personal data via analytics, ads, other embedded contents are termed as non-necessary cookies. It is mandatory to procure user consent prior to running these cookies on your website.